This challenge involved a special side channel attack on elliptic curve cryptography. It was one of the hardest challenges in the Ledger Donjon CTF. Writeup by esrever and joachim.

Note: projective coordinate in this writeup refers to Jacobian coordinate.

I’m spending a lot of time on this board that computes ECDSA signatures on secp256k1, with an unknown private key.

Using my favorite oscilloscope, I was able to capture what I think is the computation of this signature.

I was able to get a lot of signatures of the same message, and to record a power trace each time. Using signature verification, I was able to also retrieve the resulting curve point P each time.

My reasonable assumption is that the developers used the usual formulas: point addition and point doubling

After some time analyzing the traces, I have come to the conclusion that the implementation is really well protected, as I couldn’t find any meaningful signal relative to these operations.

Once again, I have a reasonable assumption that the algorithm used to perform the inversion of the Z coordinate is the classic extended binary GCD, that is described for example in Algorithm 1. here.

I don’t have any idea what to do of all this, but I really need this private key!

I extracted from my traces the relevant window. You can download the resulting campaign as an hdf5 file here.

Can you help me retrieve the private key?

The challenge description is quite long, but basically we need to break ECDSA by exploiting extended GCD used for transforming projective coordinates. We also get the following update.

The description of Projective Signatures has been updated to add a precision about the underlying algorithm: The scalar multiplication algorithm is probably performed left to right, bit by bit, as a sequence of double and add operations.

This confuses us for a while: the original description says that the implementation of point addition and point doubling are well protected, but the clarification talks about scalar multiplication. Does that mean they are not really “well protected”? Also, suppose we can get back the projective coordinates by exploiting extended GCD, is there a way to get nonce k by comparing projective coordinates of G and k * G?

It turns out that we are asking the correct questions and we quickly find a paper dealing with almost the same problem: “From A to Z: Projective coordinates leakage in the wild”. The summary of the attack roadmap is: 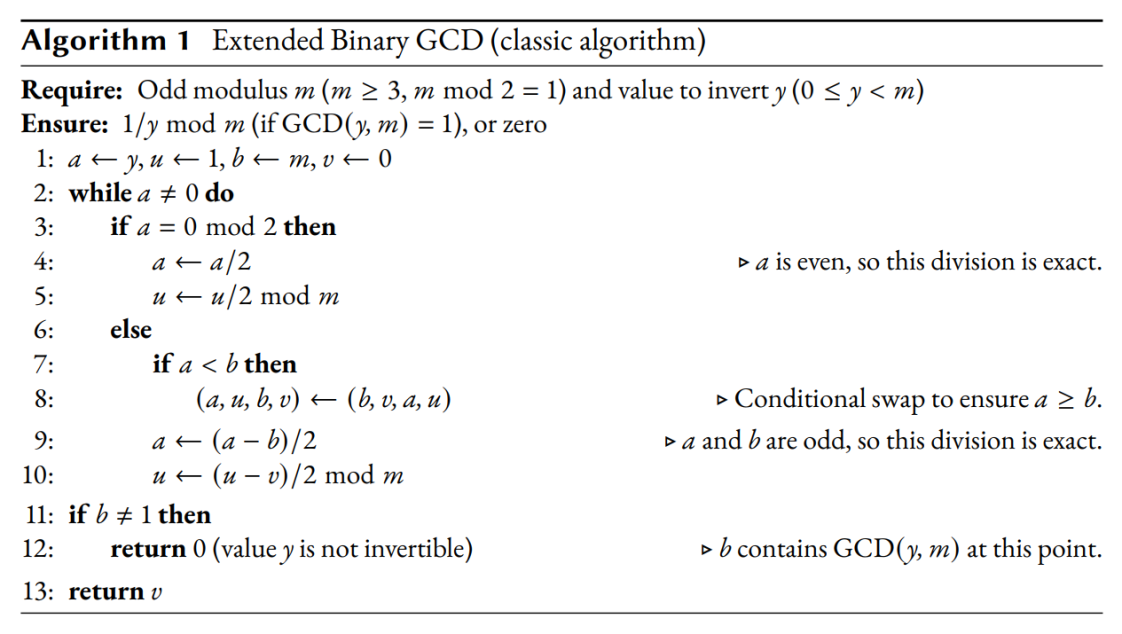 Here is the extended binary GCD mentioned in the description and part of the given traces. It takes us some time to understand the traces and thus to recover the projective coordinates. Here is our thought process along with the observations:

With this, we are able to consistently recover the input of the extended binary GCD. However, it seems that the inverse is taken against the elliptic group size rather than the field characteristic. Luckily, the problem setter confirm that it is a mistake on their side and release a new set of traces.

Here is the script to recover the projective coordinates. It does not work for some traces because of premature thresholds, but it finds enough coordinates for the attack.

Trying to leak information of nonce with elliptic point itself is probably as hard as solving the discrete logarithm problem, but knowing the projective representation of scalar multiplication allows us to easily obtain some information. This is the main idea of projective coordinate attack.

In a classic double-and-add algorithm, different operations are performed for zero and one bits, leading to different algebraic properties in the projective representation.

Suppose $P$ is from $double$, we have the relation

By checking the existence of 4th root and cube root, we can rule out the possibility of one of the operations. We do it recursively and leak the bit(s) until the check doesn’t tell us anything.

Following is the population of nonce bits leaked. The distribution is similar to that in the paper, except for 6 leaked bits. We confirm with the problem setter that there is an intentional bias in the generated nonces, causing the anomalous figure.

Here is our Sage script for the projective coordinates attack.

After we retrieved the nonce bits, the final step is to perform a lattice attack to recover the private key. As mentioned in section 6.3 of the paper, this recovery problem can be formulated as the Hidden Number Problem. When implementing the attack as described, there is still one catch: in lbgcrypt a nonce is padded as follows: $k = \hat{k} + \rho n$, with $\rho = 1$ for secp256r1.

Although we could have brute-forced the $\rho$ value if necessary, we decided to check with the challenge author. In this case, $\rho = 0$, so the lattice implementation is slightly different. The rest of the attack is straightforward to implement using Python and Sage.